An Aged Connecticut Man Beaten to Death and Robbed in His Home.

Middletown, Conn., Feb. 29.–“In the little town of Cobalt, near here, Timothy Parmlee, 76 years of age, was found dead on the floor of his kitchen in his house yesterday. Mr. Parmlee lived alone, his wife having left him several years ago. Parmlee’s skull was broken in three places, his nose crushed and his face, head and body were covered with bruises, cuts and contusions. Nearby in a pool of blood was a flat-iron. It is thought that the deed was committed by burglars. No money was found in the old Man’s possession and his watch and chain were gone.”– From the Lawrence Daily Journal (Lawrence, Kansas), Feb. 29, 1896.

Middletown, Conn., Feb. 28.–(A. N. P.)–George Washington, ex-slave, was buried here Monday with military honors. He fought with valor throughout the Civil war with the Union forces and was very proud of his war record. He was a member of the local Grand Army post and always acted as color bearer on Memorial day.

Washington did not know the date of his birth but he was of a ripe old age. His long time owner, Miss Cornelia H. Wetmore, who survives him, celebrated her ninety-ninth birthday last month. Washington refused to leave her and for years was a sort of major domo in the family.

A prominent Naugatuck Valley lawyer has been investigating the State Industrial School in Middletown, Conn., and the result has caused no little scandal in that State. It is said that the institution is little better than a house of assignation. An investigation will be made, and a shocking state of affairs is expected to be disclosed. Of recent inmates, Katie Boughton has just given birth to an illegitimate child at the New York City Hospital. Mary Jessup, of Waldron, has an illegitimate child six months old. Fannie Tucker, aged seventeen, is about to be confined, and Mary Green, aged fourteen, was confined January 1. The last three are at the New Haven Home of the Friendless. It is alleged that these girls were all ruined at the school, or at places where the school put them out.

When the Roads Are Blocked With Snow He Does Double Service.

Middletown, Conn., Feb. 26.–In these days when a haircut costs 50 cents, the roads are piled so high with snow that it is hard to get to the barber from the back districts. So the Rev. George B. Gilbert of this city, an Episcopal missionary, has taken to cutting hair, along with preaching.

Mr. Gilbert was brought up on a farm in Vermont and learned to cut hair there, in winter evenings, but he is no mercenary hair-chopper. When his auto is heard chugging past one of the country school houses the teacher hurries to “flag” him, so to speak. Thereupon Mr. Gilbert comes in and cuts the children’s hair without charge.

He says that it is just as important to shear the locks of his flock as it is to preach.

Special to The Leader.

Connecticut Pastor Says There is More Hope of Making a Good Citizen of Him Than His Opposite.

Middletown, Conn., Feb. 25.–The Rev. George B. Gilbert, rector of Christ’s Episcopal church in this city, has been making a study of the boy problem and announces that there is really more hope of developing the typical bad boy than the typical good boy into a useful citizen.

Mr. Gilbert prefers bad boys for Sunday school pupils and the more devilry they display the more hope he has of them.

It was announced today that he has rented a fifty acre farm, bordering on a small lake, and will turn it into a practical plant for making bad boys into useful citizens.– From The Chicago Daily Tribune, Feb. 26, 1910.

Middletown, Conn., Feb. 24.–(AP)–Judge Ernest A. Inglis today ruled in superior court that a man may properly call a telephone, especially a party line, “an instrument of the devil,” without being adjudged insane.

He made this ruling in ordering release of Edward Noole Bennett, who was committed to the hospital last month, as describing the telephone as an instrument of the devil.

Middletown, Conn., Feb. 23.–“About midnight Thursday the inmates of the North College building at Wesleyan were aroused by an explosion which shook every beam and rafter in the building and called to mind the blowing up of the Park Central at Hartford. The report could be heard in every quarter of the town. The explosion was caused by a dynamite bomb thrown by some foolhardy student on the fourth floor of the building. It shattered doors and windows, tore a hole down through two floors and knocked out several yards of plastering. In observatory hall the same outrage was perpetrated, only with greater effect. The halls of both buildings are filled with plaster, wood, glass, etc., in such quantities that it seems impossible a dynamite cartridge could have made such havoc.

The worst feature of it all is the accident to N. C. Hubbard, son of ex-Congressman Hubbard of West Virginia. After the explosion in North college, young Hubbard ventured out of his room to ascertain the cause of the racket. He was no sooner in the hall than he saw a small missile lying on the floor near the door and picked it up. It was a dynamite cartridge or bomb and it immediately exploded in his hand. The palm of his right hand was terribly lacerated, his eyes badly cut and pieces entered his abdomen. It must have exploded with terrible force, as it threw fragments of his flesh all around. When the injury to Mr. Hubbard became known several physicians were summoned and they deemed his condition so serious as to warrant his removal to the hospital at New Haven, where four fingers of the injured hand were amputated. It is barely possible that his hand may be saved.” –From The Council Grove Republican (Council Grove, Kansas), March 1, 1889. 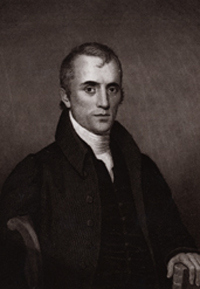 The papers from the east announce the death of Rev. Wilbur Fisk, which took place at Middletown Conn., on Friday last. Dr. Fisk was president of the Wesleyan University, located at Middletown, and has been esteemed one of the brightest ornaments of the Methodist church, both on account of his extensive acquirements and his great piety and zeal. He has been intimately connected with the many efforts to extend the light of christianity, and few men engaged in the cause of christian charity will leave behind them a name more honored or revered.

Where is Harrison Church?

(Special to News and Observer.)

Chapel Hill, N. C., Feb. 28.–Postmaster Pritchard has received a letter asking for certain information. Not being able to furnish it, he requests the publication of the letter in the News and Observer. It is as follows:

Dear Sir:– During the Civil War I was an inmate of Castle Thunder, Richmond, Va., I was a soldier in the Union Army and was a prisoner there during the fall and spring of 1864 and ’65, and there was a man there, a prisoner from North Carolina, by the name of Harrison Church and I would like very much to learn his address. I had it some years ago, but lost it and looking over some old memorandum I found your address, and it seems to me that Chapel Hill is in the region where Harrison Church belonged. If you can give me Church’s address, I will be very much obliged to you.

Aetna Chairman John H. Filer claims that this expansion is a demonstration of Aetna’s “commitment to the area and its people.” In addition to the move, Aetna negotiates tax agreements in Middletown and Hartford during this time. It is decided that Aetna will pay forty percent of normal property taxes and fifty percent of its land taxes for a seven year period beginning in 1983. The tax agreement is rationalized in a statement by Michael Cubeta claiming that Aetna will increase the rate of employment in Middletown.

Middletown, Conn., Feb. 20.–“Fire has been discovered in a pile of 1,000 tons of coal in the yards of the Middletown Coal company. The fire, which was probably originated by spontaneous combustion, is thought to have been burning several days. A loss of $2,500 has already been sustained.”– From The Sunday Leader (Wilkes-Barre, Penn.), Feb. 21, 1897.