Defeated by Lines of Meriden.

The Fight For the Congressional Nomination Settled on the First Ballot–Hard Work Done by the Ex-Mayor of Meriden and His Friends Brings About the Result. 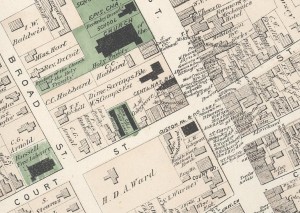 Middletown, Conn., Sept. 26.–It has been a long time since Middletown contained such an army of politicians as marched upon her lunch counters, 110 strong, today. They came from all over the Second Congressional district and they were very hungry. The atmosphere outside was raw and cold; in the corridors of the McDonough house it was hot, stifling and thick with tobacco smoke. The early trains unloaded crowds of delegates, and they had the entire morning to fight it out at the hotel.

Everywhere it was Lines versus Graham and Graham versus Lines. There was, strange as it may seem, Editor Graham, of the Meriden Republican, backing Lines and a rural delegate names Lines backing Graham. Some of the politicians who came up last night to do what they could toward corraling the early worm, found that Middletown is a Lines hotbed. Graham sprouts didn’t flourish here. But when New Haven was heard from it was found that the big city, with its great overpowering democratic majority, favored the man from the little town of Orange. The delegates from New Haven were prepared to wipe the floor with Lines men. Police Commissioner Herbert E. Benton and Judge Rufus S. Pickett, who got here in advance of the main guard, were doing all they could to favor Senator Graham’s candidacy. Julius C. Cable and William P. Niles, the attorneys, also came up to see the fun and drop in a word here and there for the New Haveners’ choice. H. C. Newton was another lawyer who was seen buzzing a good many delegates.

The anti-convention fight was warm. A perfect avalanche of words streamed through the corridors of he McDonough house and ran into little torrents through the barber shop and billiard room. Two delegates would meet, challenge each other for a joint debate, throw down the issues, a crowd would collect around them and wade up to the waist in imaginary gore until they became faint from loss of breath, when they would make a break for the back room and partake of liquid refreshment together. One of the heavy hitters in the whole grant prize ring was M. A. Sullivan of Meriden. Mr. Sullivan is the man who went to New Haven a few days ago to secure the indorsement of the Trades Council for H. Wales Lines. It was charged by a very respectable labor man that Mr. Sullivan brought a powerful argument to bear upon his fellow laboring men. Mr. Sullivan indignantly denies this charge. He told a great many delegates that he had never received a dollar from Mr. Lines or any of his friends, and that he never did anything but sound the sentiment of the organized labor element of New Haven. He went to Naugatuck Valley and he said that everywhere he found that organized labor was in favor of Ex-Mayor Lines. He claimed that Mr. Lines would, if nominated, receive over 1,000 labor votes. He pointed to this week’s Naugatuck Agitator in which H. C. Baldwin comes out strongly in favor of Mr. Lines. He also pointed out the fact that the brick layers of Middletown of whom there are 47, formed recently a republican club for the purpose of booming the candidacy of H. Wales Lines. Forty bricklayers joined the club, and out of these, he said, twenty were democrats. According to Mr. Sullivan there was a popular whirlwind of excitement among the laboring men of the district in favor of his favorite.

On the other hand Commissioner Benton advised that Mr. Graham could poll a big democratic vote in New Haven, and showed facts and figures as he claimed, to back up his assertions. One thing about the discussion was that the Lines men had never heard of this man Graham before and the Graham men wanted to know who in thunder Lines was anyhow. There will have to be a lot of introducing done after the convention.

None of the delegates before the convention cared to risk any assertions as to the strength of their favorite on the first ballot. But it was pretty evident that Lines had done the most work. He had been doing the canvassing, while Graham had been allowing his boom to do its own inflating. Lines has had men in Middlesex county for a week, and has made himself very solid with Mr. Coffin’s friends. He has also scoured the Naugatuck Valley and apparently has captured the labor leaders. His friends claimed some 66 or 67 votes on the first ballot.

The convention met in Armory hall promptly at 12 o’clock. David B. Hamilton, of Waterbury, a member of the congressional committee, called the convention to order. Adjutant General F. P. Camp, of Middletown, was made temporary chairman, W. H. Newton, of Wallingford, being the secretary elected. E. T. Turner, of Waterbury, Edward Douglas, of Middletown, and C. E. Thompson, of Orange, were chosen a committee on credentials. The temporary organization was made permanent.

J. P. Platt of Meriden, E. E. Johnson of East Haddam, H. E. Benton of New Haven, H. G. Newton of Durham and Willard Eddy of Haddam were the committee on resolutions. During the recess while the committee on credentials was out printed tickets as follows were distributed among the delegates:

For Congressman–H. Wales Lines of Meriden.

Editor Graham had half a bushel of them in his pockets.

The report of the committee on credentials was accepted without further reading.

Without further ado James P. Platt of Meriden, a son of Senator Platt, made a short speech, placing in nomination H. Wales Lines of Meriden. The nomination was seconded by D. C. Hamilton of Waterbury.

On behalf of Senator Graham Clarence E. Thompson of Orange placed his name before the convention. Herbert E. Benton seconded the nomination, claiming that his favorite could run well in New Haven, which he termed the […] scab of the district. E. M. Judd of Wallingford let loose another flood of oratory in behalf of Mr. Lines.

The resolutions adopted were:

The representatives of the republican party of the second congressional district in convention assembled earnestly approving of the platform adopted by the national and state conventions of the party and heartily endorsing the candidates named by those conventions and believing that the prosperity and general welfare of the people of the district in common with that of the people of the whole country is to a great degree involved in the political campaign now pending, do hereby resolve:

First. That no man who acknowledges his sympathy with the free trade tendency of the democratic party as exemplified in the President’s message to congress last December, and in the so-called Mills bill and who is not uncompromisingly in favor of the principle of protection to American industries and American labor ought to represent this district in congress.

Second. That the interests of the people of this district and state demand a continuation of tariff protection from the evil effects of competition with the under-paid labor of foreign  countries in harmony with the legislation of our state enacted by the republican legislature of 1880, by which the people of all trades and occupations are protected form ruinous competition with under-paid prison labor.

Third. That the renomination by the democratic party of a candidate for congress at the instigation of the leading federal official of the district, brought about as it was by open and flagrant violations of the principles of civil service reform, demands and should receive emphatic condemnation at the ballot box.

Fourth. That in the person of * * * the voters of this district are presented with a candidate who peculiarly represents the interests of the wage earners, who can be relied on as a faithful and study supporter of the principle of protection to home industry, and whose election will afford an ample guarantee that the interests of the district generally will be ably, honestly and conscientiously cared for in the national house of representatives.

Judge Rufus S. Pickett further urged the convention to nominate Senator Graham. He said that the Irish democratic voters were disgruntled in New Haven and claimed that the six-foot-two free trader of Middlesex county as he called Mr. Wilcox would be defeated if Mr. Graham were nominated. The convention was letting itself loose in floods of oratory. Edward Douglas of Middletown advocated H. Wales Lines. Willis Bonner, the colored delegate from New Haven, brought down that house by saying that while men differed in their tastes, some preferring white bread and some rye bread, he preferred Graham bread every time.

The convention then proceeded to take an informal ballot. The delegates deposited their ballots in a hat at the chairman’s desk, voting as their names were called.

The ballot resulted as follows:

The nomination of Lines was made unanimous on motion of H. E. Benton.