Middletown, Conn., April 21.--After months of frequent stealing of his chickens Henry I. Nettleton, a farmer, near Durham, rigged in his bedroom an electric alarm that would inform him of the opening of the hennery door. At 2 o’clock this morning the alarm rang. Donning rubber boots and an overcoat he rushed out and found a man with a bag at the hennery.

The men grappled. In the tussle Nettleton was hurt, but he overcame his opponent. Mrs. Nettleton brought a lantern by the light of which the couple recognized Frederick Hall, a well-to-do neighbor.

Hall did not appear this morning and Nettleton got a warrant for his arrest on a theft charge.

Middletown, Conn. (UPI)— Computers may never duplicate the intricate responses of their creator, the human brain, but they still are a better “memory bank” than man’s cerebrum.

So now they’re being used commercially as “memory joggers” in the “SOS Division” of Canberra Industries, a Middletown firm based in nuclear electronics, data systems, analytical instrumentation and research. For a relatively modest fee “SOS” will feed into a computer vital statistics a subscriber might forget or information he might need should important documents stray or be stolen.

“SOS” will record “anything with a number,” according to David H. Smith, 29, head of Canberra’s sales force and originator of the service.

“Depending on what is lost, we will assist a subscriber in obtaining a new document,” said Smith, explaining that his firm has necessary forms for this, governmental or otherwise.

One facet of the service is immediate notification of creditors should a subscriber’s credit cards be lost or stolen.

Another reminds subscribers of important dates a busy person might forget. A wife’s birthday, perhaps, or a favorite niece’s graduation. The subscriber will be nudged through a card sent to his office, and he is saved from possible embarrassment.

Smith said subscribers also can be reminded of expiration dates on magazines and insurance policies.

Or perhaps a subscriber loses his car keys while covering a sales territory hundreds of miles from home. A call to SOS and he can find out the factory code number to his keys, and forthwith a car dealer can make him a new set.

Before handing out information, SOS checks on a caller’s identity by asking his height, weight and birth date which is compared with information on file. “We have to be sure we are giving information to legitimate people,” Smith said.

Smith’s inspiration for SOS resulted from some personal irritations. About a year ago he lost a gasoline card and wanted to notify the company. A company service station told him to call a New York City number. This resulted in the familiar “I’ll have to transfer your call” runaround until he was told he’d have to write… not phone… to an office in Kansas City.

It took the shock of a temporarily misplaced wallet before he fully realized the aggravating situations caused by the loss of important cards and documents.

SOS charges under $10 for a “package” registration covering credit cards, car keys, important dates and documents. For an appropriate additional charge, it will send the Mrs. a box of chocolates or a bottle of perfume.

(By the Associated Press.)

Middletown, Conn., April 8.–A novel plan for holding a dual track meet by telegraph has been agreed to by the authorities governing athletics at Wesleyan university and Amherst college, it was announced here today.

The meet will be held during the latter part of this month or early in June, so as not to interfere with examinations. A pre-arranged program of track and field events will be run off simultaneously at Amherst and Wesleyan at the time agreed upon. Bulletin boards will be erected on the respective fields, and the results by telegraph will be announced. Of course there is the possibility of differences in weather and track conditions but the promoters hope the innovation may help to broaden interest and participation in athletics.

We have this day seen a superb Sword, made at the factory of Mr. Starr, in Middletown, (Conn.) in obedience to a vote of Congress. The actual cost of this sword is one thousand dollars, and it is believed, that a more superb article of the kind has never been seen in this or any other country.– We shall endeavor to give a brief description of it.

On one side of the hilt are the arms of the United States–on the other the following inscription:–“Voted by the Congress of the United States, to Colonel Richard M. Johnson, in testimony of the sense of his gallantry in the battle of the Thames, in Upper Canada, October 5th, 1813.” The head of the hilt is an Eagle, bearing an open wreath in its mouth. The head of the guard is a bust of Ceres. The thumb-pieces on each side form a spread eagle, holding in his talons an emblem of Agriculture. The bow of the guard represents a wreath of branches, descriptive of the Union of the States. The blade is of the sabre kind, of the best material, and so well tempered as to resist any impression which has been attempted to be made upon it.

The scabbard is richly gilded; the ornaments which are of solid gold, reflect great credit on the ingenuity of the artist.

The case which contains the sword, is of that kind of wood, called Bird’s Eye Maple, and is of superior beauty and workmanship.

We understand that Mr. Starr will leave this city for Washington to-morrow morning.

“A Middletown, Conn. woman while eating stewed oysters Sunday evening complained that one of them was full of bones. On examination it was found to contain 45 pearls, varying in size from a pea to a pinhead.”

Middletown, Conn., April 3.–Captain George Comer, of East Haddam, a noted Arctic voyager, is arranging for a 16-month cruise to Repulse Bay, the head of navigation on Hudson Bay, in the interest of the Museum of Natural History, of New York City. The expedition is to be financed by Lincoln Ellsworth, a wealthy New York man.

The museum will send four experts with the expedition, comprising a zoologist, a geologist, an ethnologist and an anthropologist. Captain Comer has made a number of trips to the Arctic region. Several of them have been with Anthony Fiala, explorer. The start will probably be made from New London, Conn.

Middletown, Conn., March 27.–W. Wiltshire Riley, residing at Cromwell, received probably fatal injuries last night by falling down his cellar stairs. Mr. Riley is over 89 years old. When a practicing dentist in Columbia, O., Mr. Riley invented false teeth, which has brought him in over $50,000.

A new sea anchor has been invented by Michael McCarthy, of Middletown, Conn. The anchor is filled with oil in such a way that the oil is diffused over the waves as the anchor is tossed up and down, and so a comparative calm is created in which the vessel may ride out a storm in safety.

Middletown, Conn., Feb. 5.–“Prof. W. O. Atwater has just completed an important experiment in the respiration calorimeter at Wesleyan to determine the relation of food to muscular energy. The subject was one of the college athletes, who was in the experimental chamber for nine days and ten nights.

Prof. Atwater, who conducts experiments for the government in connection with work at Wesleyan, has not completed his analysis and calculations of his latest experiment and will not for several weeks. He authorized the following general statement of the result obtained, withholding the name of the student who submitted to the test:

“He was in the respiration chamber nine days and ten nights after a preliminary test. During eight days he was engaged in active exercises, riding a bicycle, which was attached to a dynamo for measuring the amount of muscular work performed. One object of the experiment was to find the relation between muscular activity and the consumption of food and body material and the transformation of energy in the body.

“It was the idea to compare the efficiency of fats and carbo-hydrates for supplying the needs of the body in time of hard muscular work. To this end the diet during four days contained large quantities of carbo-hydrates, sugar and starch, which in the last four days were replaced by fats in the form of fat meats, butter and the like. The experiment was very successful and promises results of decided interest. Several weeks will be required for completing the analysis and calculations.”

In addition to these experiments at Wesleyan similar ones are being carried out at other colleges. The results of studies of the diet of the Harvard crew at New London last summer are about ready for publication.

Prof. Atwater has long conducted scientific experiments on the relation of food to muscular energy. He aroused a storm of criticism about a year ago, when he announced that two and one-half ounces of alcohol could be consumed daily without injury to the human system, if taken in small doses.”– From the Deseret Evening News (Salt Lake City, Utah), Feb. 5, 1901. 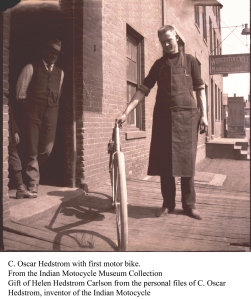 In January of 1901 George Mallory Hendee persuaded Carl Oscar Hedström to develop a prototype for a mass-manufactured motorized bicycle.

On February 1st 1901 the tool room of the old Worcester Cycle Manufacturing Company located at 24 Hamlin Street in Middletown, Connecticut, was leased from S. Brooke Page for the sum of $1.00 a day, which included the supply of power, electricity and machinery. It was there that Carl Oscar Hedström began to design, and with his own hands, construct the 1st Indian motocycle prototype.

In the early part of May Mr. Hedström took the prototype machine out of the shop and rode it around the block on its initial trial spin. He then towed his friend, S. Brooke Page, who was on a bicycle, up College Hill in Middletown as a test of the power of the motor. Mr. Page weighed nearly 200 pounds and the original Hedström motor pulled him easily.

On May 18th 1901 Mr. Hedström had totally completed the prototype, packed the machine into a bicycle case and shipped it by train to Springfield Massachusetts for the approval of George Hendee, who was engaged in the manufacture of bicycles in Springfield. Shortly upon its arrival, Mr. Hendee took a trial ride with the prototype machine which performed much to his satisfaction.

On May 25th 1901 the prototype machine was given a public exhibition on the Cross Street hill in Springfield where, with Mr. Hedström in the saddle, he rode up a 19 per cent grade 350 feet long, making the ascent several times at varying speeds to demonstrate the power and control of the machine.

Interest in the prototype machine from the press and potential customers encouraged Mr. Hendee and Mr. Hedström to form a partnership to mass-produce the motorized bicycle with Mr. Hendee as president and general manager and Mr. Hedström as chief engineer and designer.

Hedström’s prototype machine was put into production in Springfield, Massachusetts, in late 1901, launching what became for a time the largest manufacturer of motorcycles in the world.

In your eighth number I observed an account of a discovery in hydrostaticks, made by a Mr. Allen, of Martha’s Vineyard, viz. separating fresh from salt water. The discovery is indeed useful and important, but not novel. –Captain David Starr, an inhabitant of this town, made an experiment of that kind 20 years ago, and succeeded so far as to supply 1300 men with fresh water ten days. Necessity, which is justly termed the mother of invention, induced him to the trial, and he doubtless would have improved on his original discovery, had not want of encouragement, which is too often the misfortune of genius, prevented him from prosecuting his philosophical researches.